November 10, 2018
I don't experiment much with chili because it rarely goes well for me and my family. I've slowly adapted my chili recipe over the years, but I've still always used canned chili beans, with a flavored sauce. I've been wanting to try regular beans (whether canned or dried, I wasn't discerning, just didn't want the sauce), so off to the Googles I went rather than trying to recreate the spice blend from my normal canned beans. 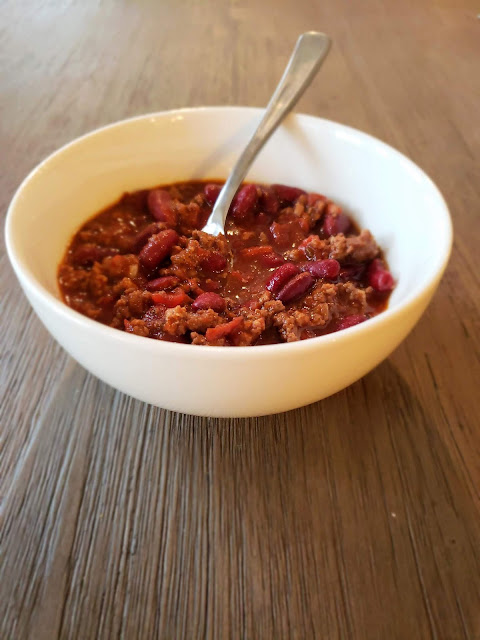 Because I was originally planning to make chili in the Instant Pot, that's where I focused my search. Thankfully the recipe I decided to try was adapted from a Slow Cooker recipe, because life got in my way and I wasn't able to make the chili the night before as planned, and I wouldn't have had time to use the pressure cooker with my schedule that day.

What drew me to this recipe was the simplicity of the ingredients. And lack of jalapeno. Because somehow nearly every time I plan chili I forget to buy a jalapeno, even if it's on the list. I was also intrigued by the method of browning the beef, to actually brown it, rather than just steam and "gray" it. A baking soda mixture is mixed in to the beef for about 20 minutes before browning, which really helps the meat retain the moisture, rather than the normal escape of moisture ending with browned beef sitting in a puddle of watery fat.

This chili was a real winner in our house. I'm glad I finally decided to look for a recipe using non-sauced beans. I've made it a few times now, in both slow cooker and pressure cooker. I can't say I prefer one to the other, both are great!

Directions:
Mix the baking soda with water and stir until dissolved. Drizzle over a bowl of ground beef and thoroughly mix it in. Cover and let sit for 20 minutes.

While the meat is sitting, chop the onion and garlic, then mix together the chili powder, cumin, oregano, and cayenne pepper.

FOR THE SLOW COOKER:
After 20 minutes, brown the beef, then add to your slow cooker pot. Add chopped onion, garlic, and spice blend. Mix well.

Once cooked, season with salt and pepper to taste

Serve with garnishes of your choice. My newly discovered favorite is crushed tortilla chips! (and of course cheese!)

FOR THE PRESSURE COOKER:
Turn the saute function on, and add 1 tablespoon oil to coat the bottom. Brown beef until no longer pink. Add garlic and onions and saute for a minute or 2 until the onion softens a bit.

Turn off the saute function and add half of the spices to the beef, and stir well.

Add beef broth, mixing to scrape up any brown bits on the bottom of the pot.

Add crushed tomatoes and tomato sauce. Do NOT mix.

Add the lid to the pot, and lock it, with the steam release set to "sealing". Select the manual setting and adjust to High Pressure and cook for 12 minutes.

Once the cook time is up, release pressure naturally for 10 minutes. If necessary, manually release the rest of the pressure by CAREFULLY opening the vent. (Use a thick kitchen towel, it'll hurt a lot less!)

Open the lid and add the remaining spices and beans. Mix well.

Turn on the saute function of the pressure cooker, and adjust to medium. Cover and let simmer for 10-15 minutes, stirring a few times to make sure it doesn't stick. (You can either use a glass pressure cooker lid, or if you're like me and don't have one, just loosely cover with the regular lid.)

Season with salt and pepper to taste.