I jumped on to the Instant Pot bandwagon on Prime Day 2016. I used my Instant Pot for the first time probably March 2017, aside from the water test just to make sure it worked (and I still wasn't sure 😄). I have not made a lot in it, and that is something I'm trying to rectify.

It really is a time saver IF you plan accordingly. The first time I used it for actual food I did not realize it would take time to come to pressure and release pressure. But once I realized that and started planning for that additional time, I've been able to plan more pressure cooker meals.

I work full time, and usually at the office, so the Instant Pot does come in handy on days that I have things I need to do at home after work, and don't have time to prep, saute, bake, etc. Once the food is in the pot and I turn it on, it is hands-off until nearly time to eat. Which gives me more time to help my son with homework, straighten up around the house, get ready for soccer practice, or hopefully more often, play outside with my kids! 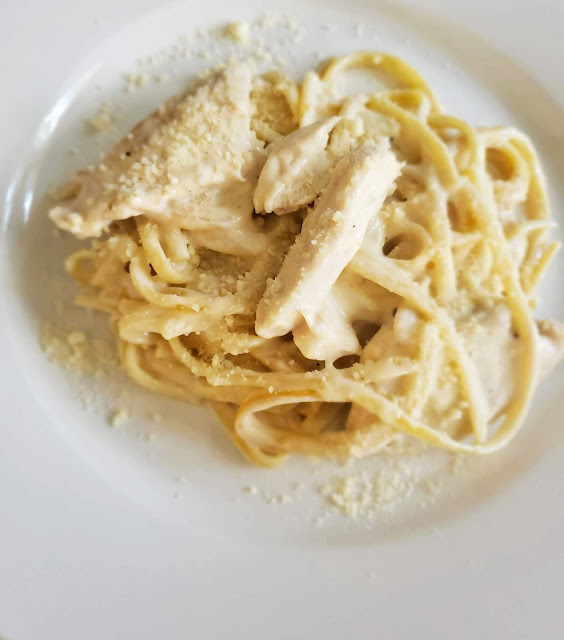 Even though I don't use it a lot, most of what I've made has been awesome. So much so that Rob actually asks for this Chicken Alfredo dish at least once a month. One thing to know about him is that when he asks for something it's usually something elaborate that I need all weekend to make, like cannelloni with homemade fresh sheets of pasta. So when he asks for something that takes me all of 5 minutes to prep I will add it to the menu!

Directions:
Using the saute function of the pressure cooker, heat olive oil. Once hot, add chicken and brown on all sides, about 2-4 minutes*. Add garlic and saute for about 30 seconds.

Pour in chicken broth, layer broken pasta on top, then layer on heavy cream and sprinkle with salt and pepper. You do not need to stir together, but press down on the noodles to make sure they're submerged in the liquid.

Close the pressure cooker with the lid. Lock in place and set the steam release knob to Sealing.

Press the Manual button and then + / - to select 6 minutes for linguine or 7 for fettuccine.

After the cook cycle allow to sit naturally releasing pressure and steam for 2 minutes. Using a thick kitchen towel, cover the steam release knob and move carefully to venting to manually release steam and pressure.

Once the button pops down indicating all pressure is release, carefully open the lid and stir it all up. Stir in cheese and allow to sit for a minute. It should thicken up, but if not you can saute for a moment or add more cheese. NOTE: since the pot is already hot, it will saute and bubble up quickly. Keep a close eye on it if you choose to saute to thicken.

* NOTE: You can use cooked chicken. If you choose to do so, just quickly saute the garlic, then layer on broth, pasta, cream, salt and pepper, still pressing down to ensure pasta is submerged.

Source: adapted from  Simply Happy Foodie
Additional source: I've also made this one with a jarred sauce which is delicious as well. I like to have a jar in the pantry  at all times just in case (since I don't always have cream in the fridge and on nights that I need a quick meal this is a go to.)