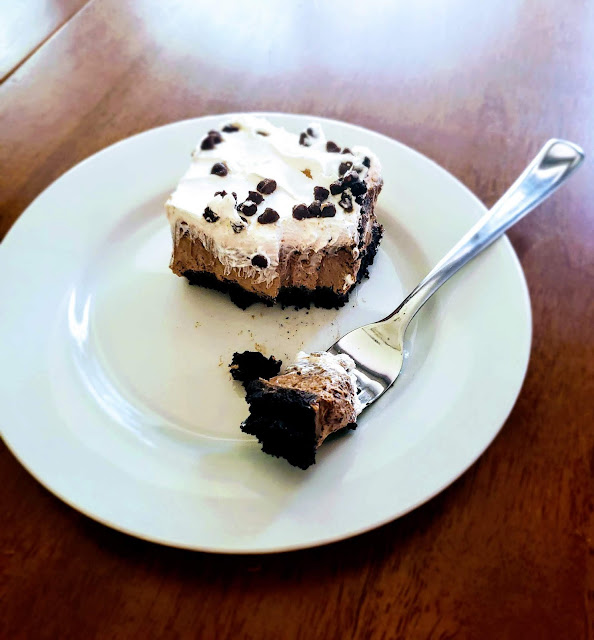 I'm certain I've said it before, but I'm not a huge chocolate fan. But I've always had a soft spot for chocolate pudding. One day, when I was looking through recipes to make for Thanksgiving, knowing others were bringing the traditional pies, Tyler saw a French Silk pie that he wanted me to make. I didn't want to deal with the raw eggs, so I decided to keep looking, but still making a chocolate pie. He'd never know the difference anyway, right?

When looking for new recipes to try, especially for the kids, I base my search on appearances. I'll check Pinterest, but more often than not I do a Google Image search. Which led me to this pie. When I opened and saw it was a Kraft recipe using pudding I knew it'd be simple and delicious. Simple enough that Tyler pretty much made this on his own for Thanksgiving (at 6.5 years old).

He was ob.ses.sed. Every time I needed to make a dessert after then he asked for this pie. The time never came to make it, until his family birthday party. I had to improvise a bit, since we were expecting about 40 people at the party (Rob has a big family, and it was actually a birthday party for 4 cousins, all with June birthdays.) I doubled the fillings, and made an Oreo crust "from scratch". The crust was a little too thick, but when I include instructions in my note below, I did adjust for the quantities that will work better!

This pie is easy and delicious, and is now a go-to chocolate dessert that I'll always keep handy! 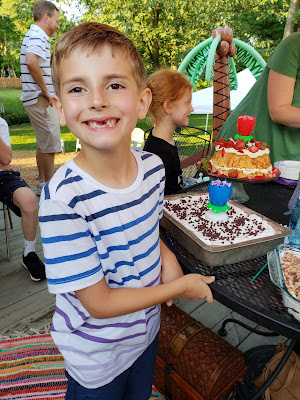 Directions:
Beat pudding mixes and milk in a large bowl, about 2 minutes. Allow to set in fridge for a few minutes.

Spread 1 1/2 cups of the pudding onto the bottom of the prepared Oreo crust.

Stir half of the Cool Whip into remaining pudding. Spread over plain pudding layer.

Top with remaining Cool Whip and garnishments as desired.

Refrigerate at least 3 hours, or until firm.

Note: to make a 9x13 "cake" as I did here, double all, minus the pie crust. To make the pie crust:
- Crush 1 1/2 packages of Oreos, and drizzle in 1 stick of melted butter. Evenly coat the bottom of a pan, going up the sides a bit, and using a glass to tamp it down. Bake at 350 for about 7-10 minutes. Allow to cool before layering.