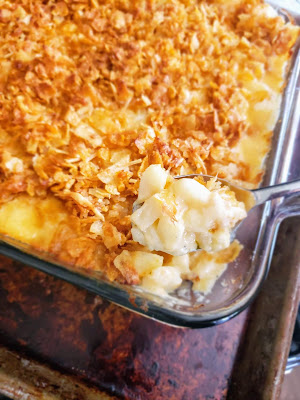 This concoction of frozen hashbrowns, a creamy cheesy mixture and a corn flake topping is called many things. I grew up calling it Hashbrown Casserole. Rob grew up calling it Cheese (or Cheesy) Potato Casserole. I've also seen it called Funeral Potatoes. Honestly, it should just be called Pot-Luck Potatoes because I bet nearly every pot luck in the Midwest/Central corridor of the country has at least once Pyrex with this dish on the food table.

And who can blame us? It's cheese, potatoes, and a crunchy topping! Both sides of our family incorporates this dish in to many functions throughout the year. It's not Easter without this on the menu. Both sides of the family make them nearly the same way as well - frozen hashbrowns, cream of chicken/mushroom soup, sour cream, cheese, LOTS of butter, and the cornflake topping.

Several years ago I was "assigned" to bring them to Easter brunch. Rob was complaining about being sick of them since we have them so often, so I decided to stick to the basics of the dish, but find a new way to make them. I wanted to see if I could make them essentially from scratch, but still maintaining the same creamy cheesiness.

I'm pretty certain this recipe hit the nail on the head! It was everything I was expecting, but a more cheesy flavor, less butter, and the addition of potato chips to the crunchy topping. 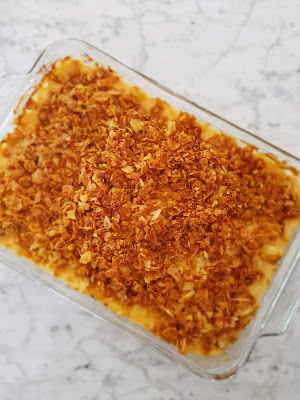 Melt 6 tablespoons of butter in a deep skillet over medium-high heat. Add the onions and cook, stirring occasionally, until the onions begin to soften, about 4-5 minutes. Sprinkle with flour and stir to incorporate. Cook for another 2 minutes.

Whisk in milk, making certain to get rid of the lumps. Whisk in broth, again removing lumps. Bring the mixture to a simmer and allow to thicken, about 4 minutes. Season with salt and pepper.

Sprinkle mixture over potatoes. Cover with foil and bake for 30 minutes. Remove foil and continue baking until golden brown on top and bubbling around the edges, about 15 more minutes. Allow to cool for 10 minutes before serving.

Source: adapted from Ree Drummond, as seen on Food Network