Build a (Binkie) Bear - how we finally got rid of the binkie! 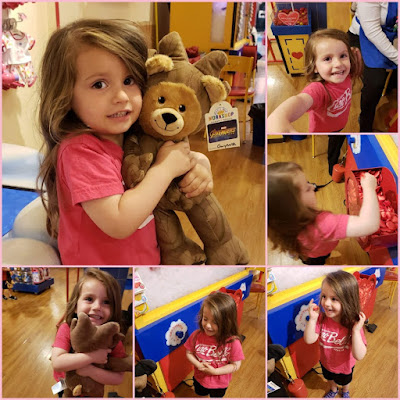 Sometimes I feel like I’ve got this parenting thing down. Other times I would look at my 3.5 year old little girl with the binkie in her mouth and wonder how could I have let this go on so long? But, with Gwyneth, I feel like we’re first time parents again, and this was new territory for us. The difference between her and Tyler is night and day! Ty gave up his pacifier at seven months old!

Now, Gwyneth. Girlfriend was an addict! My plan all along was to get her off the binkie by two, but the thing is, we used every single excuse we could come up with to not have to deal with the aftermath of getting rid of the beloved binkie. In a wedding. Moving twice in five months. New day care. Cross-country flight. Transitioning to a big girl bed….

Finally, we were out of excuses, and honestly just over it. That binkie ruled her life.  We tried a few tricks, and nothing worked. Cutting the nub, our Elf on the Shelf and later the Easter Bunny taking it back, donating to babies without binkies. Nada. Nothing worked. Finally, we brought out the big guns, fully knowing that this was final. We threw out all but one, and while Rob took Tyler to see Infinity War, a movie she was desperate to see, I devised a special day just for her.

We went to Build a Bear to make a binkie bear. I didn’t realize this was a “thing”, but when I told the women at the workshop what we were doing they knew exactly what I was talking about and made a huge deal about it. Gwyn was so excited, and I was so proud of how well she took the whole thing. And, in true Gwyn fashion, she picked a Groot instead of traditional bear. (P.S. – judge me all you want. Yes, my 3-year-old could school many on Marvel trivia. She’s seen nearly every movie – save for Deadpool because even we have limits – and I think she has a baby crush on Captain America, and wants to be Gamora!)

Binkie Groot was well received, and for the most part successful. Once we got in the car she threw a fit – but not for her binkie, rather because she wanted another bear. The first few nights were a little rough, but it only took about three nights. Oh, and remember how I said girlfriend was an addict…. I’m not kidding. The first night without her binkie she was scratching herself, lost without it. I guess the binkie was her high.

She still occasionally asks for it, but I just remind her that Binkie Groot is always there for her, and she can rub his hand to feel her binkie.