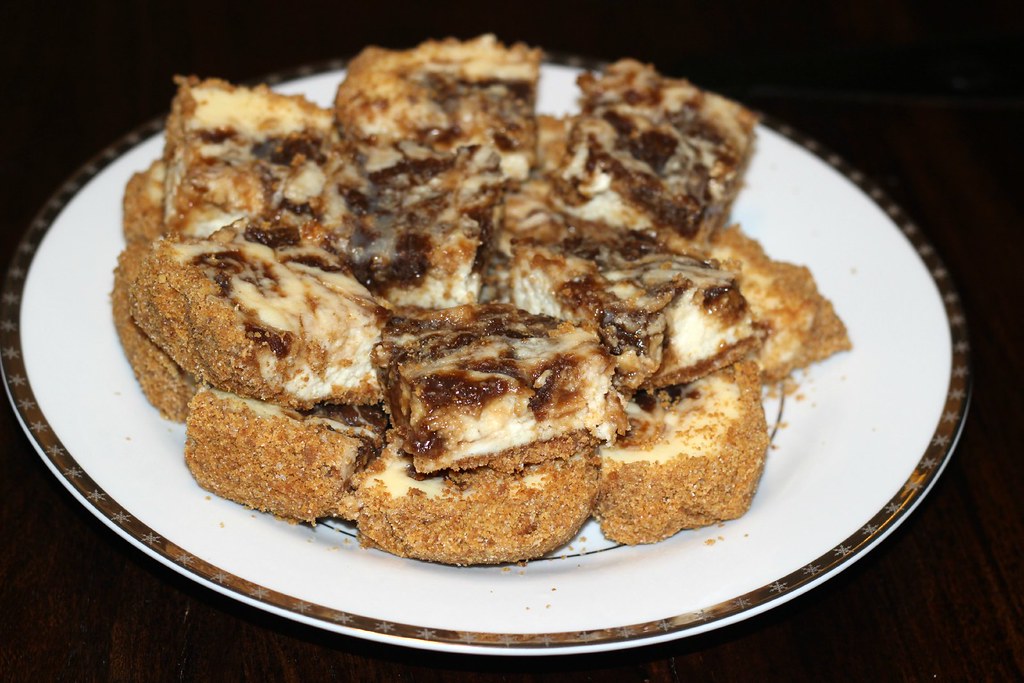 When I received an email from a friend menu planning for a then upcoming Thanksmas dinner with friends, I immediately jumped in and said I'd bring dessert. As I always do. But of course, I searched and searched for ideas, and nothing sounded just right to appeal to a group of people. All of a sudden it's like the day before and I still need to shop and bake. I wanted to do a cheesecake, but with everything going on I didn't know if I'd have time. So I turned to trusty Pinterest and just typed in Cheesecake Bars.

As soon as I saw these I knew I had to make them. I emailed a picture to Rob and all he replied was "Yep!".

I am so glad that I slacked and slacked on deciding, because these were simply amazing. And, they don't require any out of the ordinary ingredients, so I had everything on hand! I realize not everyone had Graham Crackers in their pantry but a) why not, they're delicious!? and b) just a quick stop and you're good to go!

These cheesecake bars are quick, simple and so delicious. No one has to know how quick and simple they are!

Instructions:
Preheat oven to 350 degrees. Line an 8x8 pan with foil, and grease with cooking spray.

Pulse graham crackers in a food processor until fine crumbs form. Add sugar and cinnamon and pulse. Add melted butter and pulse until well combined. Press mixure into prepared pan, using a flat hard surface to really press it down, such as a glass cup! Bake for 5 minutes.

Meanwhile, prepare cinnamon roll filling by combining butter, cinnamon and brown sugar in a small saucepan over medium heat. Cook and stir until butter is melted and ingredients are combined. Stir in vanilla and flour.

In a large bowl beat together egg and sugar until foamy. Add cream cheese and vanilla and beat with a mixer on low until smooth.

Pour mixture on top of graham cracker crust. Drizzle with cinnamon roll filling and use a toothpick to swirl in to the cheesecake layer.

Bake 20 minutes or until set. Allow to cook 30 minutes and then move to refrigerator to continue cooling for a few hours.

When completely cool, cut and serve!