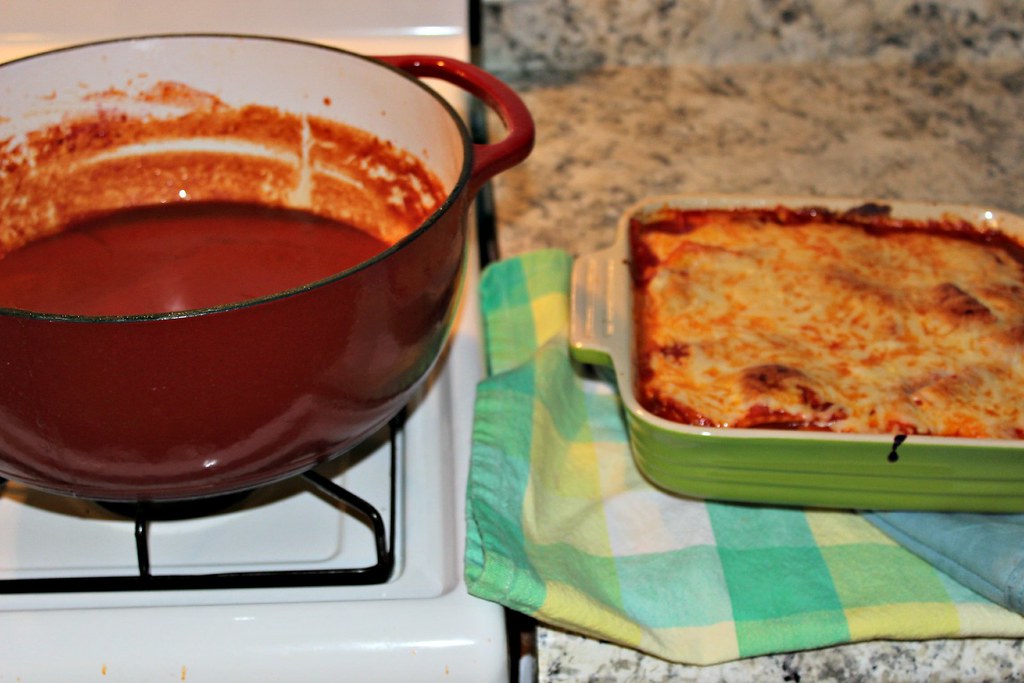 I have to admit that I didn't think having a second baby would hinder my kitchen efforts as much as it had. It's not that I don't have time to cook and bake, but it's finding an APPROPRIATE time to cook. With a preschooler running around, and a newborn that LOVES to eat, it seems that the hours between school and bedtime have me running around without any sort of direction trying to cook, keep the kids happy, answer the door of politicians and solicitors, etc. I'm not back at work yet, but I know that day will come quicker than expected, and I need to figure this whole thing out before then.

Enter make ahead meals. I've always done a pretty good job of making extras of certain dishes that freeze well, such as chili, lasagna and seasoned beef for tacos, burritos, etc., however I've never been really good at taking advantage of the rare free moment to prep ahead for the next day or coming week. I admit that I like to be lazy if I can! That being said, I want to stop being so lazy; it'll certainly make dinner time a lot easier. I need to start reinventing leftovers more, prepping for meals on the weekend or the night before while a casserole is in the oven or something, actively making freezer meals, anything I can to get dinner on the table without tearing my hair out, or ignoring my family. There's no point in taking the time to cook for my family if I'm too stressed to enjoy it!

With that in mind I've decided to implement a Make Ahead Monday segment on the blog. On Mondays I will post a meal that can be used to help make cooking in advance a little easier. Whether that's as fully make ahead as prepping a meal from start to just before cooking on night one to pop in the oven on night two, or something to pull out of the freezer before heading to work in the morning, a crockpot meal that's ready when you get home, or even just a way to prep some of the ingredients to save 10 minutes! I'm definitely not promising a weekly post... at least not yet. I do have a newborn at home that loves to eat, so I'm spending A LOT of my time acting as a dairy cow.

I have a marinara sauce that I absolutely love, but sometimes it's too much for certain dishes. It's not the lightest sauce known to man. Also, I may not always have ingredients on hand if I get a hankering for a quick spaghetti. But with this sauce, it's literally 3 ingredients that I always have on hand. And it's pretty light for a tomato sauce. And it's E-A-S-Y! Open a can, cut some butter, cut an onion... simmer and serve! You really can't get much easier than that.

This is a great make ahead recipe because you can make a big batch of it and use throughout the week in repurposed dishes, or freeze some of it. For example, when I made this I doubled the recipe. I froze half, and I used just under half to make a baked ravioli. I set aside about a cup for pizza later in the week. Now, I have sauce in the freezer for a night that I don't have time to simmer, and I had sauce ready for pizza in a few days!

Directions:
Place all of the ingredients in a sauce pan over medium heat. Bring to a simmer and reduce heat to low. Simmer for 45 minutes, stirring often, breaking up the tomatoes to get the desired texture you want (I like mine smooth smooth smooth!).

Remove the onions and serve!

Note: You can also use tomato puree and simmer a little less. I've done this too when I don't want to deal with breaking up the tomatoes since I do like mine smooth.