I’m not one of those women that are terrified of my 30s.  I can’t wait, even though I’ll have to deal with the jokes for 11 months until Rob turns 30!  However, I’m excited.   My thirties will be fantastic.  My son will turn ONE while I’m 30 and I’ll get to experience so many firsts with him, even though it doesn’t seem like he has many more since he’s done so much lately.  But we still have first steps, first “real” words, first birthday, first day of school, etc.  All of which will happen in my thirties!

Anyway, everyone deserves to ring in 30 in a celebratory fashion, right?  How about a nice little boozy dessert?  While I prefer to drink wine (Cabernet and Pinot Noir) or beer (specialty craft beers, or any Sam Adams Seasonal), my mixed drink of choice will generally include Rum.  Usually a Rum and Diet (gotta cut some calories, right?!).  If I’m going to make a boozy dessert to ring in my birthday, I may as well pay homage to the classic drink, skipping the diet since it is a dessert after all. 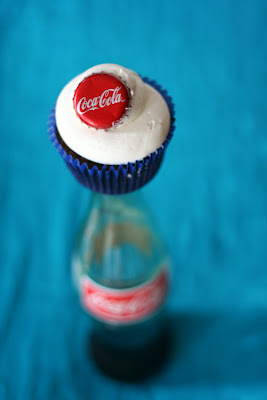 These cupcakes definitely had a Rum and Coke flair going on.  The cupcake base was a Chocolate Coke batter, and the frosting was a Rum spiked Swiss Meringue Butter Cream. I loved that they weren’t overpowering, but you could still tell what the flavor was going for.  However, if you wanted a little more punch, add a little more rum to the frosting!  I will say though, I ate two (I made some minis to feel less guilty eating more) and one was still pretty chilled, the other was warming up to room temperature, and the warmer the frosting got, the more the rum became noticeable.  Just something to consider when debating if you want to add more rum or not!

And, as a side-note: this was my first SMBC.  Not scary at all, as I previously imagined!  Many people are intimidated because for a while the frosting looks lumpy, soupy and curdled.  Just keep mixing and eventually you'll have a delicious buttery frosting!

Directions:
For the Cupcakes Preheat oven to 350 degrees. Line pan with cupcake liners.

In stand mixer fitted with a flat beater, combine flour and sugar; set aside. In saucepan, combine margarine, cola and cocoa and bring to a boil.  Remove from heat.  Add marshmallows and stir slowly until melted.

Fill cupcake liners about 1/2-2/3 full and bake for about 17-20 minutes or until toothpick inserted in center comes out clean. Let cool before frost.

** Don’t worry if the batter seems a little thin; it will bake up fine!

For the Frosting Combine egg whites and sugar in a bowl placed over simmering water.  Bring mixture to 150 degrees F while whisking constantly.

Transfer mixture to stand mixer bowl, fitted with a whisk attachment and beat on medium high speed (8 on a KA mixer) until mixture cools and doubles in volume, forming soft medium peaks; about 10-12 minutes.
Add butter in one piece at a time, mixing to incorporate after each addition.  The mixture may appear clumpy and almost curdled looking at first – this is normal for Swiss Meringue Butter Creams!  Keep mixing – it will become even and smooth again!

Add salt and rum and mix to combine.
Pin It
Sources: Cupcakes from I Heart Cuppycakes, originally adapted from Coca-Cola
Frosting  adapted from Baker’s Royale