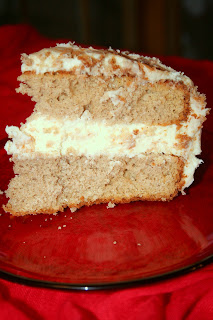 When looking for cheesecake ideas online, I stumbled across this delicious looking cheesecake on Erin's Food Files.  A red velvet cake with a NY Cheesecake middle layer!  I immediately wanted to make it knowing it would impress, however I was not feeling Red Velvet.  Knowing that the holidays were right around the corner and that I had a few Red Velvet desserts planned, I decided to switch up the cake, using the same basic idea overall though.  I love cinnamon flavors, especially this time of year so I looked for a Cinnamon Spice cake that would pair well with a cheesecake middle layer.

Once finding the recipe I wanted to go with I was so excited to try this cake out.  Disappoint it did not!  Although the picture above is not fantastic (I didn't have time to take any pictures before serving, and this was the one last slice leftover for Rob and I to share - which I dropped) I couldn't wait to share this fantasticness with my friends and readers.  Two (well, three with the frosting) relatively simple recipes combined to make one show-stopping dessert.

Cut parchment paper in a circle and line the bottom of the spring-form pan.  Wrap bottom half of the pan in foil.  Pour in filling; place in a roasting pan.  Pour in boiling water to come halfway up side of spring-form.  Bake until just set in center, about 45 minutes.  remove pan from water, let cool 20 minutes.  Run a pairing knife around  edge; let cool completely.  Cover; chill overnight.

For the cake:
Preheat oven to 350 degrees.  Butter two 9-inch round cake pans.  Line the bottoms with parchment paper and butter the paper.  Dust the pans with flour, tapping out the excess.

In a medium bowl, whisk the 1 1/2 cups of all-purpose flour with the cake flour, baking soda, baking powder, cinnamon and salt.  In a stand mixer fitted with a paddle attachment, beat the butter with sugar at medium speed until  fluffy, about 3 minutes.  Beat in the eggs and vanilla until incorporated.  In 3 alternating additions, add the dry ingredients and sour cream, scraping down the side of the bowl between additions.

Scrape the batter evenly into the prepared pans.  Bake the cakes on the lower and middle racks of the oven for about 30 minutes, until golden and springy and the edges begin to pull away from the sides of the pan.  Transfer the cakes to racks and let cool for 15 minutes, then turn the cakes out and let them cool completely. Remove the parchment paper.

For the frosting:
Beat cream cheese, butter and vanilla together in a large bowl with an electric mixer until combined.  Add sugar and beat until frosting is light and fluffy, 5-7 minutes.

Place top layer of cake on top of the cheesecake.  Coat with a generous layer frosting to act as the crumb coat.  Refrigerate about 30 minutes then frost with as much of the remaining frosting as desired.  Top with garnish of your choice.  I sprinkled cinnamon over the top, and lined the bottom with cinnamon sticks.

Refrigerate until ready to serve.  The cake does not have to be kept in the fridge until immediately before serving.  It's OK to sit out a bit!