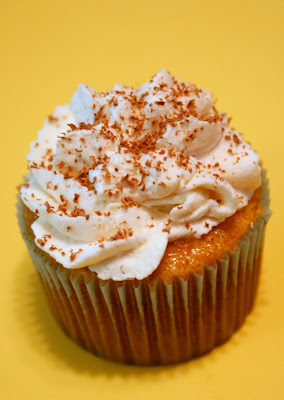 In every group of friends, each person has their "thing"... in my group I'm coining myself "the Cupcaker".  Ever since I took Guinness Cupcakes with Baily's Irish Buttercream  to a friends party I'm continually asked for them again.  As much as I love them, I don't want to be "the Guinness Cupcake Girl" - not that that's a bad thing, but I'm not a one-hit wonder so to speak.  Wanting to play off of that I concocted a list of boozey cupcakes to try out and decided to take some to a 4th of July party.  After debating the list I decided to try White Russian Cupcakes because I've had those on my list for YEARS and the opportunity I wanted to try them at never came up.  For those not familiar with a White Russian - you must not have seen The Big Lebowski, and I urge you to do so immediately if you like cult-classic type movies!  A White Russian is made with Vodka, Coffee Liqueur (Kahlua) and cream (or milk like I make them) so you can see why they'd make a great cupcake!
Now, I never actually had a specific recipe I wanted to try, just an idea.  In order to source a recipe I must admit that I am a fanfic addict - specifically, Twilight fan fiction.  One of the stories I was reading (which has been taken down so I can't link) was based on Bella owning a cupcake shop where she would develop a recipe of the day based on a quote of the day Alice came up with.  The author of the story actually created a blog with most of the recipes and when I read the chapter with White Russian Cupcakes I immediately ran to the blog to check it out since they've been on my list for so long.
These cupcakes were a HUGE hit!  They contained the flavors of a White Russian without being too overpowering, were moist and overall were fantastic.
White Russian Cupcakes
Ingredients:
For the Cupcakes
1 18.25 oz. yellow cake mix
1 3.4 oz. instant vanilla pudding mix
1 cup vegetable oil
3/4 cup milk
4 large eggs
1/4 cup Vodka
1/4 cup plus 2 tablespoons Kahlua, divided
1 tsp. pure vanilla extract
For the Frosting
1 cup heavy cream
2 Tbsp. powdered sugar
1 tbsp. Kahlua
semi-sweet chocolate to shave or grate for garnish
Directions
Place rack in center of oven; heat to 350 degrees.  Line 24 muffin wells with liners and set aside.
In large mixing bowl combine cake mix, pudding mix, oil, milk, eggs, vodka, 1/4 cup Kahlua, and vanilla.  Blend on low speed for 30 seconds.  Scrape sides of bowl and increase speed to medium and beat for 2 minutes, scrapping down sides if needed.  Spoon batter into liners, filling to 3/4 full to make between 22 and 24 cupcakes.
Bake until golden and spring back when lightly pressed with fingers; 17-20 minutes.  Remove from oven and place on wire rack to cool 5 minutes.
Brush tops with remaining Kahlua.  Remove cupcakes from pans and place directly on rack to cool completely before frosting.
Meanwhile, prepare the frosting:
Place large, clean mixing bowl and beater in freezer to chill a few minutes.  Remove and assemble.  Beat cream on high speed until thickened - about 1-2 minutes. Stop the mixer and add sugar and Kahlua.  Beat on high speed until stiff peaks form, 1-2 more minutes.
Frost cooled cupcakes as desired.
The frosting recipe makes enough to spread cupcakes with frosting - if you want to pipe frosting on you will want to double the recipe.
Source: adapted from Morning Boss (Take the Cake by SandyK199 fanfic blog)