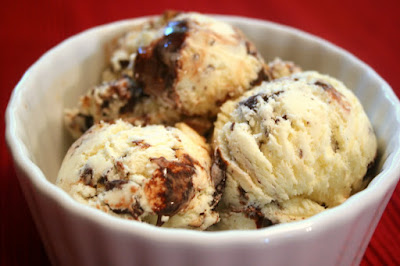 Summer-like weather has been in St. Louis full-force for awhile now and what better way to embrace/fight it off, then with the most perfect complement to summer - ICE CREAM!  This was one of the most delicious ice cream recipes I've ever had.  It's made up of three components - two of which sounded like a dream come true to me, and one of which may have converted my entire demeanor to it's flavor in general.

This ice cream starts with a vanilla bean custard base, then you throw in some chocolate covered honey roasted peanuts and layer in some fudge sauce.  Let me just tell you that vanilla bean is one of my favorite flavors ever, of anything (including perfume!), then on top of that I love honey roasted peanuts (which is what I used for this recipe).  Those two right there had me excited to try this recipe, though I almost felt like I could take or leave the fudge ripple.
Can I just say that I was severely mistaken when brushing off the fudge sauce to the back of my mind?!  I knew there was no way that I would omit the sauce because clearly that's an important element to the ice cream, but I just thought it would be a basic chocolate sauce.  WRONG.  This fudge sauce has made me rethink my stance on chocolate all together.  While I've never disliked chocolate, it's never been high on my list of favorites.  This fudge sauce however, I felt like I could eat it all with a spoon.  It was rich, sweet and oh, so, delicious!!
Tin Roof Ice Cream
Ingredients:
¾ cup whole milk
¾ cup granulated sugar

Pinch of salt
1½ cups heavy cream
½ vanilla bean, split lengthwise
4 large egg yolks
¼ teaspoon vanilla extract
¾ cup Chocolate-Covered Peanuts (recipe follows)
Fudge Ripple (recipe follows)
Directions:
Warm the milk, sugar, salt and ½ cup of the cream in a medium saucepan. With a sharp paring knife, scrape the flavorful seeds from the vanilla bean and add them, along with the pod, to the hot milk mixture. Cover, remove from the heat, and let steep at room temperature for 30 minutes.
Rewarm the vanilla-infused mixture. Pour the remaining 1 cup cream into a large bowl and set a mesh strainer on top. In a separate medium bowl, whisk together the egg yolks. Slowly pour the warm mixture into the egg yolks, whisking constantly, then scrape the warmed egg yolks back into the saucepan.
Stir the mixture constantly over medium heat with a heatproof spatula, scraping the bottom as you stir, until the mixture thickens and coats the spatula. Pour the custard through the strainer and stir it into the cream to cool. Remove the vanilla bean, wipe it clean of any egg bits, and add it back to the custard. Stir in the vanilla and stir until cool over an ice bath. Chill thoroughly in the refrigerator.
When ready to churn the ice cream, remove the vanilla bean (it can be rinsed and reused). Freeze the ice cream in your ice cream maker according to the manufacturer’s instructions. While the ice cream is freezing, chop the peanuts into bite-sized peanuts.
Fold the peanut pieces into the frozen ice cream as you remove it from the machine, and layer it with Fudge Ripple.
Chocolate Covered Peanuts
Ingredients:
4 ounces semisweet or bittersweet chocolate, chopped
1 cup roasted, unsalted peanuts
Directions:
Put the pieces of chocolate in an absolutely dry heatproof bowl. Set the bowl over a saucepan of simmering water to melt the chocolate, stirring until smooth. In the meantime, stretch a piece of plastic wrap over a dinner plate.
Once the chocolate is melted, remove it from the heat and stir in the peanuts, coating them with the chocolate. Spread the mixture on the plastic-lined plate and chill.
Once chilled, use a chef's knife to chip the chocolate covered block of peanuts into bite-sized pieces before folding in to the ice cream before layering with sauce.
Fudge Ripple
Ingredients:
½ cup sugar
1/3 cup light corn syrup
½ cup water
6 tablespoons unsweetened Dutch-process cocoa powder
½ teaspoon vanilla extract
Directions:
Whisk together the sugar, corn syrup, water, and cocoa powder in a medium saucepan. Heat over medium heat, whisking constantly, until the mixture begins to bubble at the edges.
Continue to whisk until it just comes to a low boil. Cook for 1 minute, whisking frequently. Remove from the heat, stir in the vanilla, and let cool.
Chill in the refrigerator before using.
The Fudge Ripple should be thoroughly chilled, as it’s easiest to use when very cold. Just before you remove the ice cream from the machine, spoon some of the Fudge Ripple onto the bottom of the storage container. As you remove the ice cream from the machine, layer generous spoonfuls of the sauce between layers of ice cream. Avoid stirring the Fudge Ripple, as it will make the ice cream muddy looking.


Source: Brown Eyed Baker, from (From The Perfect Scoop