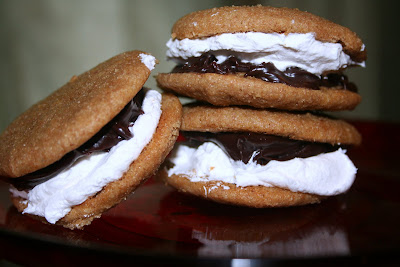 I've been in the mood to make a S'more type dessert but couldn't decide which one to make (I have about 15 starred in my Reader!)  With a coworkers birthday around the corner I thought this would be the perfect opportunity, however she's obsessed with Red Velvet Cupcake Pops.  I take those in to work A LOT so I wanted to try something different.  Noticing Red Velvet Whoopie Pies in my reader I decided to make those and another type of Whoopie Pie.  When thinking about it, I realized that a Whoopie Pie is pretty freaking similar to S'mores, so how hard would it be to make a S'more Whoopie Pie?!  Well, for awhile I thought my search was futile because everything Google provided me with wasn't what I would consider an actual S'more Whoopie Pie... Until I came across a post on Daily Candy.  I noticed that the post was from the day I found it so it was all about timing!


You.Must.Make.These... so good!  Rich, but since they're small it's not a big deal.  Most people don't have Graham Flour in their cupboards, I know I didn't, but it was easy to find and these gems would not have been the same if I tried subbing another flour.  Plus, better for you than AP flour, bonus!

Directions:Place rack in the center of the oven and preheat to 375°. Line two baking sheets with parchment paper.
In a medium bowl, stir together both flours, baking powder, and salt.
In the work bowl of a stand mixer fitted with the paddle attachment, beat butter, shortening, and brown sugar until light and creamy, about 3 minutes. Add eggs and buttermilk and beat until combined.
In a measuring cup, combine milk, baking soda, and vinegar. Add milk mixture to batter along with flour mixture and beat on low speed until just combined. Add vanilla and beat on medium speed for about 2 minutes, until completely combined.
Using a spoon, drop about 1 tablespoon of batter onto one of the baking sheets. Repeat, spacing them at least 2 inches apart.
Bake one sheet at a time for about 10 minutes each or until the cakes begin to brown.
Remove from the oven and let the cakes cool on the sheet for at least 5 minutes before transferring them to a rack to cool completely.
Spread with marshmallow cream and chocolate ganache, but if you’re in a hurry a dollop of Marshmallow Fluff and a square of chocolate will do the job.
Marshmallow Cream
Ingredients1½ c. Marshmallow Fluff
1¼ c. vegetable shortening
1 c. confectioner’s sugar
1 tbsp.vanilla extract

Directions:In the work bowl of a stand mixer fitted with the paddle attachment, beat together Marshmallow Fluff and shortening, starting on low and increasing to medium speed until the mixture is smooth and fluffy, about 3 minutes.
Reduce mixer speed to low, add confectioner’s sugar and vanilla, and beat until incorporated. Increase mixer speed to medium and beat until fluffy, about 3 minutes more.
Chocolate Ganache
Ingredients8 oz. semisweet or bittersweet chocolate chips or 8 ounces dark chocolate, finely chopped
½ c. heavy (whipping) cream

Directions:Put chocolate in a large, heat-proof bowl.
Heat cream in a large, heavy saucepan over medium heat just until it bubbles.
Pour cream over the chocolate in the bowl and let it sit for about 10 minutes, until the chocolate is melted.
Stir until smooth. Allow the mixture to rest until firm enough to spread, about 2 hours. You may also refrigerate the mixture for about 30 minutes, until it is firm enough to spread, stirring every 10 minutes.
Source: The Daily Candy (yep, in the kids section!), from the book "Whoopie Pies" by Sarah Billingsly and Amy Treadwell

November 28, 2018
For a few years I made monkey bread muffins for Christmas morning, and for some reason I got out of that habit. Then we had kids and I thought I'd get back in to it, but I didn't until recently. But I recently made classic loaf Monkey Bread and realized that it's just better than muffins. It's not like a loaf is any less "complicated" to make, or really tastes different, but there is something easier about it. And I haven't had a single loaf bubble over and cause a mess in my oven! I'm so happy to have brought this back in to our lives. Not that it takes long to put together or bake, but this is the perfect lazy weekend (or Christmas morning) breakfast. I have even started the process in advance before, by cutting the biscuits and measuring the sugar and cinnamon in a bag the night before. After all, the biscuit cutting is the most time consuming part. Wake, assemble, and voila! Do you have a big crowd to feed, or kids that devour sweets? Simply
Post a Comment
Read more