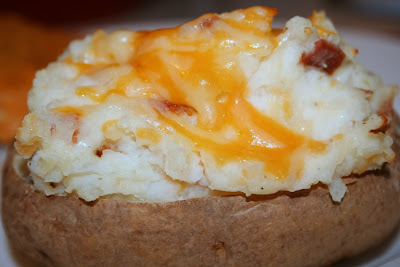 Twice Baked potatoes don't really require too much of a recipe, but if you're a novice chef, any little tip and trick will be helpful in preparing delicious meals for you and your family.  I know when I first wanted to make twice baked potatoes I asked my mother-in-law for a recipe and was floored that she didn't have one considering we'd had them at their house multiple times.  She explained the general process, told me typically what she used and set me free.  I still had lots of questions but now looking back I don't know what I was so nervous about considering I certainly knew how to cook.  I think a lot had to do with not really ever seeing my mom make them.
I've always made my twice baked potatoes pretty much the same way: bake, scoop, mash potatoes with milk/cream, S & P, a little cheese and maybe throw in some chives or bacon.  As I mentioned in my recent Cheez-It Chicken post, I had a lot of buttermilk to use up, so I thought I'd try that in my twice baked potatoes.  Again, I am so glad I had all of the extra buttermilk!  I've never really cooked or baked with buttermilk too much before but I'm thinking it may become a relative staple in the fridge.  These potatoes were creamy and a bit tangy, and still fluffy once baked again.
Buttermilk Twice Baked Potatoes
Ingredients:
2 baking potatoes
1/2 cup Buttermilk
1 Tablespoon melted butter
1/4 cup shredded cheese, any type desired
2 strips of bacon, cooked and crumbled, optional
S & P to taste
Directions:
Preheat oven to 450
Poke fork holes in the potatoes and place directly on the oven rack.  Bake for 45-60 minutes or until a fork can be inserted and removed easily and potato has softened some.
Allow to cool if you have time.  Slice the top of each potato off and scoop flesh of potato out using a spoon and leaving a shell of about 1/4" thick.
In a medium bowl, add buttermilk and butter to potato flesh.  Using a potato masher, mash to desired consistency.
Stir in cheese, bacon, S & P.
Fill each potato shell with 1/2 of the potato mixture.  Top with additonal cheese if desired and bake in still heated oven for 20-40 minutes, depending on temperature of potato going in to the oven.