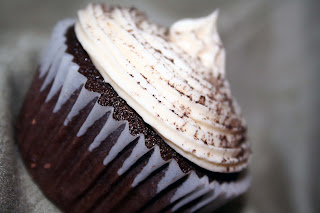 St. Patrick's Day is just around the corner, and I'm not gonna lie, I don't really eat too many traditional Irish foods (Corned Beef and Cabbage - not a fan!) While I do have some Irish blood in me I like to celebrate somewhat, plus it's a fun holiday to celebrate with some fun with friends and green beer, I figured the best way to celebrate was with baked goods!  I've seen a lot of blogs with Irish Car Bomb* Cupcake, which sounded fantastic, but just a little too rich for my taste since chocolate is not always my favorite, so I'm combined a few recipes I found to create my own.  I took this Guinness Cupcake recipe with the Bailey's buttercream used in the Irish Car Bomb cupcakes and the comination of the two was fantastic.  I could have used the cupcake recipe that everyone else used from Smitten Kitchen and just not filled with the whiskey ganache, however to be honest I liked that the Nook & Pantry recipe used a full bottle of Guinness, rather than just a cup.  My husband however made sure to joke that he asked me to pick up a 6-pack of Guinness, not a 5-pack!

* Disclaimer - I have nothing to do with the naming of the cupcakes, or the drink in which the cupcakes are named after. 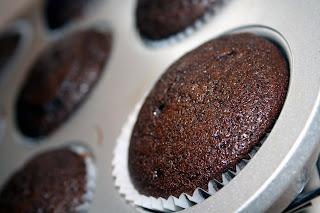 Directions:
Preheat the oven to 350 degrees and butter or line with paper cups 2 12 count muffin tins.

In a large bowl briefly whisk together the flour, cocoa powder, baking soda, and salt.

In the bowl of a stand mixer with a paddle attachment or with a hand mixer, beat the butter, granulated sugar, and brown sugar until light and fluffy.

Add one egg and beat until evenly mixed and fluffy, make sure to scrape down the mixer bowl once in a while. Add the second egg and vanilla extract and beat again until light and fluffy.

Add the sour cream and beat in, then with the mixer running, slowly pour in the Guinness.

Sift the dry ingredients into the batter and slowly stir the batter until it is evenly mixed and there are no streaks of flour. Make sure to stop the mixer frequently to scrape down the sides and make sure to mix up any flour pockets hidden on the bottom of the bowl.

Bake at 350 degrees F on the middle rack for 20 – 25 minutes. A toothpick inserted into the center of a cupcake in the middle of the pan should come out clean. Make sure to rotate the pans halfway through baking.

Brush the tops of the cupcakes with a little of the whiskey.  Set on a rack to cool to room temperature before frosting.

For layer cakes: baking 25 – 30 minutes, rotate the pans around halfway, a toothpick inserted in the center of the cakes should come out clean. 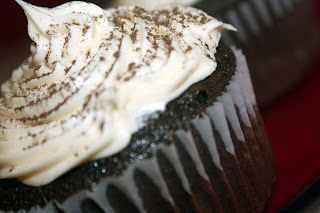 Directions:
Whip the butter in the bowl of an electric mixer, or with a hand mixer, for several minutes. You want to get it very light and fluffy. Slowly add the powdered sugar, a few tablespoons at a time.

When the frosting looks thick enough to spread, drizzle in the Baileys (or milk) and whip it until combined. If this has made the frosting too thin (it shouldn’t, but just in case) beat in another spoonful or two of powdered sugar.