February 12, 2010
Majority of people like cheesecake, and who can blame them?  It's creamy, sweet and there's numerous variations out there.  Admitedly, while I love cheesecake, I don't make many but that's something I'm hoping to remedy.  Truth be told I don't make that many because a.) I don't have many reasons to take cheesecake somewhere and b.) there is no need for a cheesecake for just the two of us.  With that in mind, any time I can concoct an excuse I'll take it.

We had a group of friends over for Super Bowl this year and after surveying what everyone else said they'd bring that left me with the desserts and some appetizers.  I would love to say something cleverly sarcastic, however whatever I type will not be able to do justice to my sarcasm voice there.  I was SOO excited to get to try a new dessert but there was just a matter of what.  While purusing Annie's Eats I came across a recipe for Peanut Butterfinger Cheesecakes and knew it was a winner, especially considering my Mother-in-Law gave my husband a big bag of Butterfinger bars for his birthday a few weeks ago and I hid some!

These cheesecakes did not disappoint, and thankfully we had some leftover to freeze so I can take 1 or two out at a time whenever I crave them (which is always so cue the willpower!!) 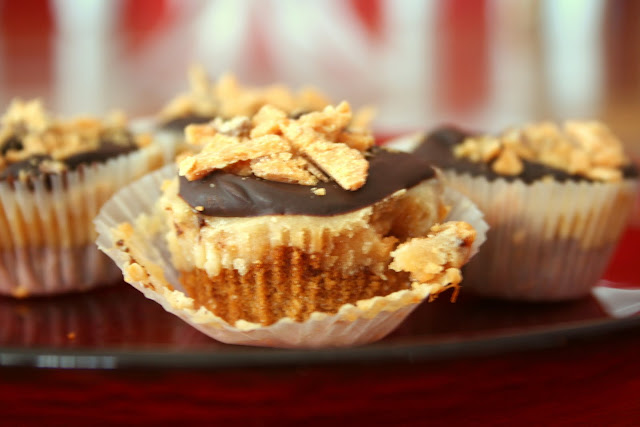 Directions:
Preheat the oven to 350° F. Set a 24-well mini-muffin pan on a baking sheet. Line with paper liners. In a small bowl, combine the graham cracker crumbs, sugar, melted butter and salt. Toss with a fork until the mixture is completely moistened. Press a small spoonful of the mixture firmly into the bottom of each well. Bake for 10 minutes, then transfer to a cooling rack.

Reduce the oven temperature to 300° F. To make the filling, add the cream cheese to the bowl of an electric mixer fitted with the paddle attachment. Beat until smooth. Add the peanut butter and beat again until well combined. Mix in the sugar, eggs, cream and salt. Fold in the crushed Butterfinger pieces with a spatula. Spoon evenly into the wells of the pan over the crust. Bake for 20-22 minutes or until the center is set. (The cakes may puff up a lot, but they will sink again while cooling.) Let cool for at least two hours before removing from the pan.

For the topping, heat the chocolate and the heavy cream in the top of a double boiler until the chocolate is melted. Stir just until smooth and glossy. Spoon over the tops of the cakes and sprinkle with the remaining crushed candy bar pieces. Chill until ready to serve.