September 24, 2009
There is this local "hole-in-the-wall" joint by my house that has this fantastic panini that I get every time I'm there (well, both of the two times I've been there is several years!).  Simple sandwiches are usually pretty easy to replicate, and this one certainly was.  I think at the restaurant it's literally just called the "Chicken Panini" however it's the ingredients in the description that drew me to it.  At the restaurant it's grilled chicken, basil, diced tomatoes and asiago cheese on buttered sourdough, however when I made it at home I omitted the tomatoes (not a fan) and used delicious Ciabatta from Panera.  Yum, just as declious at home as it was at the restaurant, though without the bar food cost or the nasty cigarette stench.  In fact, it was probably better because the only thing (aside from the tomatoes) that I don't like about the sandwich from the bar is that they use full basil leaves.  I love basil but it's actually a little hard to eat the sandwich without taking out a whole leaf of basil.  It's still good, I'm just saying.... 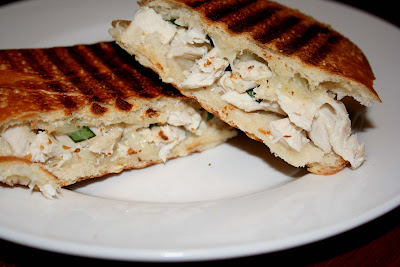 Inspired by the "Chicken Panini" at Frankie G's in St. Louis

Directions
- Season Chicken as desired with S&P, and grill, approximately 4 minutes per side or until internal temperature reaches 165 degrees (I used leftover Rotisserie Chicken)
- Let chicken rest for a few minutes then roughly chop and place pieces in a medium bowl
- Combine basil and tomatoes with chicken and using hands combine the mixture to ensure there will be a bit of each ingredient in each bite!
- Cut bread in half both length and width-wise, spooning half of the mixture on two quarters of the bread.
- Top chicken mixture with ~ 1 ounce shredded Asia go cheese
- Using a Panini Press heat for about 5-8 minutes, or until desired temperature and amount of melting reached