August 25, 2009
I'm really craving fall foods. Well, not necessarily fall foods per say, more just rich, hearty, warm foods - like a fantastic baked pasta. I typically make lasagna or manicotti/cannelloni when I want a baked pasta but this time I decided to vary it up a smidge. We were recently at an Italian restaurant and I almost ordered the Baked Ravioli because it looked so good, but we were really just there for the bar side of the restaurant so I got a Roast Beef sandwich instead. Ever since though I've been wanting Baked Ravioli. What better way to curb that craving than to make it myself?! 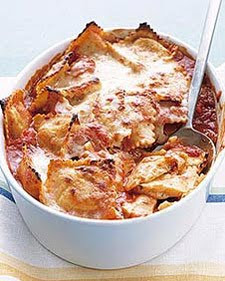