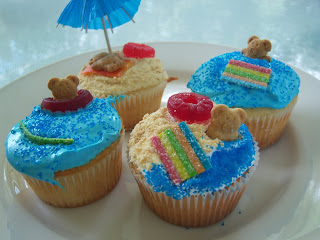 I saw these cupcake pops on Bakerella's site and just knew I had to use the idea sometime. When thinking about something fun to make for 4th of July I thought about something summery that the kids would enjoy so obviously a cute cupcake would do the trick and what's more fun in the summer than fireworks and swimming? Not much, I'll tell you that! Knowing that everything is fireworks galore on the 4th I decided to go the swimming route and make these cupcakes. Not only were they adorable, it really only took an extra 10 minutes to decorate than if I were to frost a plain-jane cupcake. Surf's Up! (aw man, I wish I had made some surfin little dudes! I'll have to remember that for next time!) 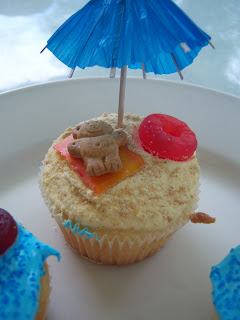 Airheads Xtreme Belts (rafts, towels and cut up by color for pool noodles)

* various other candies that could be used as beach party accessories (mini gum balls as beach balls, sweedish fish, etc.)

- Spread each cupcake top with desired amount of frosting (I typically don't like a lot of frosting but I did make these with a little more so the little dudes had something to stick to!)

- Use teddy grahams and candies as fun decorations - be creative

- Dip a few iced cupcakes in crushed grahams to look like sand (and a few half in the grahams for a sand and sea look!) 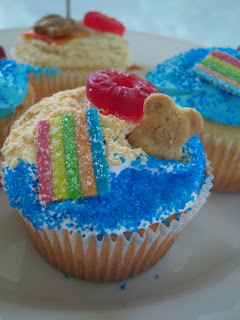