January 14, 2009
Normally when I bake chocolate chip cookies I use the recipe on the bag. While they're always good I was looking for something a little different for my husband's birthday. Also, a few weeks ago we were hanging out with some friends and one of the snacks was Chocolate Chip Cookies and my husband loved them. They were thick and chewy and had a slight hint of cinnamon. So, since he said he wouldn't mind if I made chocolate chip cookies for his birthday earlier this week I decided to start trying out new recipes. I found some with cinnamon but none that seemed like what I was looking for so I just opted to try a recipe that I've heard LOTS of raves over and just add a bit of cinnamon. So, anyway, the recipe I chose was from a blog I frequent. These cookies were definitely a hit! However, after eating them my husband said that after thinking about it he'd rather have a regular chocolate chip cookie and if he wanted cinnamon he'd go for a Snickerdoodle. Ugh, oh well - at least these cookies are still awesome!! 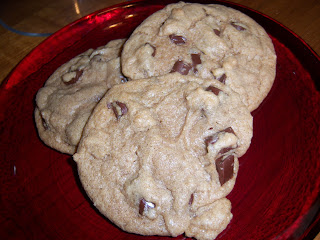 Thick and Chewy Chocolate Chip Cookies
Adapted from: Katie of Good Things Catered
as she adapted from America’s Test Kitchen