September 29, 2008
Well, I made this recipe several weeks ago and I finally uploaded the picture last week but I never had the recipe with me when I've been online...


Anyway, here is a recipe that I found in my Grocery Store's "Magazine" they put out 4 times a year (maybe a little more than that?) It's called "Everybody Cooks". If you're in St. Louis and don't shop at Dierbergs you should at least go when they have the complimentary magazine because it has a lot of great, seasonal recipes in it. So far I've only tried this one, from this issue, but there are a few others I want to try (Coffe Spiced Tri-Tip, Praline Caramel Apple Pie and Pumpkin Pancakes)... but for now I'll stick to posting the potatoes because I couldn't believe I'd never thought of this. I mean, they were so easy... basically just Panko coated roasted potatoes. YUM! 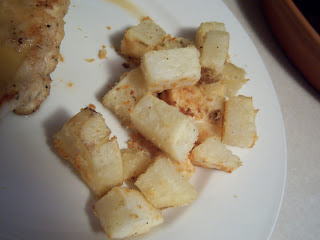 - Roast in 425 oven until potatoes are tender - about 30 minutes; stirring halfway through cooking time

- If desired, sprinkly cheese over potatoes; bake until cheese melts, about 5 minutes

** I did not sprinkle with cheese but next time I will for some variation. I just didn't have any cheese this time!