August 20, 2008
Wow, it's been awhile since I've posted. I haven't made much lately, which could explain the lack of posting, but I've also been on vacation and/or busy at work which definitely explains the lack of posting. Regardless, I have a little catching up to do so let's get right to it!

So, Rob LOVES the Jack Daniel's steak from TGI Friday's and the weekend after we got back from Mexico I mentioned I was going to thaw out and grill the steak I had in the freezer. The first thing he said to that was: "and, if you can figure out the Jack Daniels sauce from Friday's then that'll make this marriage worth it." To which I replied "well, I already figured out the Wendy's Spicy Chicken, is that not enough?!" Apparently not! So anyway, he grilled the steak (perfectly might I add - he's not that comfortable with the grill - he has a tendancy to over flip, take temps, etc.) while I made the Sauce, some green bean bundles and Twice Baked Potatoes. This was a ginormous meal, but defintiely needed as we just grazed while on vacation. 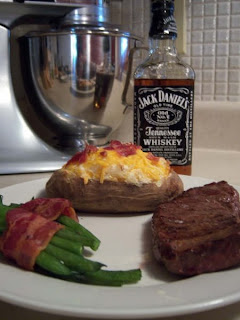 Overall the flavors of the sauce was AMAZING and soooo similar to the restaurant but the only thing I would want to tweak or play with in this recipe would be the amount of time simmering or using less water because this did not reduce in volume much (if at all) and was too runny. It would make a great marinade though!

** later note - I made another batch of this sauce for a BBQ we're going to tonight (the weekend after I made the first batch) and I used 1/4 cup water (not 1/2 c) and simmered for about 2 hours while watching a movie - PERFECT!!!! It really thickened up a lot nicer this time. AND, Rob even said from the man-cave downstairs that he could smell it and it smelled so awesome he wanted to sleep in it (then threw in - "I want to freeze it in the winter and skate on it, and melt it in the spring and drink it" ala Beerfest style!)

Twice Baked Potatoes
Ingredients
2 baking potatoes
Sour Cream
Milk
Cheddar Cheese
Garlic Powder
Salt & Pepper
Directions
Wash and dry potatoes, pierce a few times with a fork
Place in a preheated 400 degree oven, directly on rack, and bake for about an hour or until soft inside
Pull potatoes out of oven (and turn it off) to allow to cool
Cut tops off of potatoes and scoop out potato flesh so that there is about a 1/4" shell
With a fork, potato ricer or masher mash potatoes to desired consistency and add cream and milk, again to desired consistency.
Mix in Cheese, garlic and salt and pepper as desired to your personal preference (I like A LOT of cheese)
Place 1/2 of the potato mixture in 1st potato shell and top with a little more cheese (pat to adhere it a little)
Repeat with second potato
Bake at 400 degrees for about 25-35 minutes or until heated through and cheese is melted.

Green Bean Bundles
Recipe from Paula Deen
Ingredients
1 pound fresh green beans
Olive oil
Salt and pepper
Bacon
Directions
Preheat oven to 350 degrees F.
Blanch green beans for 3 minutes.
Toss them in olive oil and salt and pepper.
Bundle about 5 green beans and wrap a piece of bacon around the bundle. (I partially fried the bacon in a skillet before wrapping green beans - I've followed the exact recipe before and the bacon takes A LOT longer that she says!)
Place in a roasting pan and roast for 10 to 15 minutes, until bacon is cooked (I just did on a baking sheet)