July 29, 2008
So, I have my homepage set up to iGoogle and one of my tabs is a cooking tab.... I customized the tab to have my google reader, daily recipes, etc. and one of the daily recipes a few weeks ago was "Beer Pizza". I like beer, I like pizza, so I was intrigued. It essentially sounded like instead of layering the sauce, toppings and cheese, you just made a sauce with the toppings in it and then still topped with cheese. Sounded easy enough - and it was until I took it out of the oven. I was having a hard time rolling out the dough and apparently it was a little thiner in the middle that I thought so I had a heck of a time getting the pizza off the pan. This was definitely an "eat with fork" pizza but considering how simple it was I loved it. I'll definitely make again but I'll pay more attention to how thin I'm rolling the dough.

Beer Pizza
adapted from: http://www.allrecipes.com/
* I halved everything since I was only making one pizza but below is the full recipe *
Ingredients
1 tablespoon olive oil
1/2 pound pepperoni sausage, diced
1 pound bacon, diced
* I added ~1/4 lb. of cooked ground beef *
1 (4 ounce) can sliced mushrooms, drained (Omitted)
1 onion, chopped (Omitted)
1 green bell pepper, chopped (Omitted)
1 (28 ounce) can tomato sauce
1 cup beer
1 clove garlic, minced
1 teaspoon dried oregano
1/2 teaspoon dried thyme
1/2 teaspoon salt
2 unbaked pizza crusts
1 (8 ounce) package shredded mozzarella cheese
Directions
1. Preheat oven to 450 degrees F (230 degrees C).
2. Heat the oil in a skillet over medium heat, and saute the pepperoni and bacon until evenly browned. Mix in the mushrooms, onion, and green pepper. Cook and stir about 5 minutes, until tender.
3. In a medium saucepan over medium heat, mix the ingredients from the skillet with the tomato sauce and beer. Season with garlic, oregano, thyme, and salt. Allow the mixture to simmer for about 15 minutes, until slightly thickened. Spread over the 2 pizza crusts, and top with cheese.
4. Bake 20 to 25 minutes in the preheated oven, until the cheese is melted and the crust is golden brown. 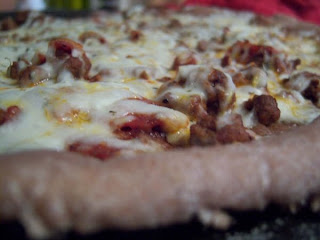 November 28, 2018
For a few years I made monkey bread muffins for Christmas morning, and for some reason I got out of that habit. Then we had kids and I thought I'd get back in to it, but I didn't until recently. But I recently made classic loaf Monkey Bread and realized that it's just better than muffins. It's not like a loaf is any less "complicated" to make, or really tastes different, but there is something easier about it. And I haven't had a single loaf bubble over and cause a mess in my oven! I'm so happy to have brought this back in to our lives. Not that it takes long to put together or bake, but this is the perfect lazy weekend (or Christmas morning) breakfast. I have even started the process in advance before, by cutting the biscuits and measuring the sugar and cinnamon in a bag the night before. After all, the biscuit cutting is the most time consuming part. Wake, assemble, and voila! Do you have a big crowd to feed, or kids that devour sweets? Simply
Post a Comment
Read more