February 13, 2008
Oh my, I've been SOOO busy lately so I'm just now FINALLY getting to update my blog some. Well, we opted out of a friend-friendly Superbowl party as initially planned because after hanging out with friends so much we were starting to get sick of it. Instead we just had our parents (and my Sister-in-Law) over for a super casual Superbowl "party". Just the basics: Chili, Wings, Macaroni and Cheese, some cheesy breadsticks, chips, pretzels, dip, brownies, beer, soda and water...

Chili
My husband is now in LOVE with my chili recipe so I just made that since it's so easy.


Balsamic Chicken Wings by Giada DeLaurentiis
(original recipe is for chicken drumsticks)
Ingredients
1/2 cup balsamic vinegar
1/2 cup honey
1/2 cup brown sugar
1/4 cup soy sauce
5 sprigs of rosemary (I only used 3... thought I had more!)
5 garlic cloves, halved
10 to 12 chicken drumsticks (I used 2 dozen chicken wing pieces)
2 tablespoons toasted sesame seeds
1/4 cup chopped fresh flat-leaf parsley (I omitted)
Directions
- Combine the balsamic, honey, brown sugar, soy sauce, rosemary sprigs, and garlic cloves, in a large, re-sealable plastic bag.
- Shake and squeeze the contents of the bag to dissolve the honey and the brown sugar.
- Add the chicken drumsticks (wings)to the bag and seal with as little air as possible in the bag.
- Place in the refrigerator and marinate for 2 hours.
- Preheat the oven to 450 degrees F.
- Place the chicken drumsticks (wings) on a foil-lined baking sheet. Bake until the skin is caramelized and very dark in spots, about 30 to 35 minutes.
- Meanwhile, place the marinade in a small saucepan. Bring the marinade to a boil (in order to kill bacteria).
- Reduce the heat to simmer and cook over low heat until thick, about 15 minutes. Reserve.
In Original Recipe:
- Use a pastry brush to brush some of the cooked marinade on the cooked chicken. Place the chicken on a serving platter.
- Sprinkle with the sesame seeds and the chopped parsley.
What I did:
- Pour cooked marinade in large bowl
- Add chicken wings and toss to cover
- Place in low serving bowl
- Sprinkle with sesame seeds

Patti LaBelle's Over the Rainbow Macaroni and Cheese
Somewhere along the way, not too long before the Superbowl, my mother-in-law came across this recipe.
Ingredients
1 tablespoon vegetable oil
1 pound elbow macaroni
8 tablespoons (1 stick) plus 1 tablespoon butter
1/2 cup (2 ounces) shredded Muenster cheese
1/2 cup (2 ounces) shredded mild Cheddar cheese
1/2 cup (2 ounces) shredded sharp Cheddar cheese
1/2 cup (2 ounces) shredded Monterey Jack
2 cups half-and-half
1 cup (8 ounces) Velveeta, cut into small cubes
2 large eggs, lightly beaten
1/4 teaspoon seasoned salt
1/8 teaspoon freshly ground black pepper
Directions
- Preheat the oven to 350 degrees F.
- Lightly butter a deep 2 1/2-quart casserole.
- Bring the large pot of salted water to a boil over high heat.
- Add the oil, then the elbow macaroni, and cook until the macaroni is just tender, about 7 minutes. Do not overcook.
- Drain well. Return to the cooking pot.
- In a small saucepan, melt eight tablespoons of the butter.
- Stir into the macaroni.
- In a large bowl, mix the Muenster, mild and sharp Cheddar, and Monterey Jack cheeses.
- To the macaroni, add the half-and-half, 1 1/2 cups of the shredded cheese, the cubed Velveeta, and the eggs.
- Season with salt and pepper.
- Transfer to the buttered casserole.
- Sprinkle with the remaining 1/2 cup of shredded cheese and dot with the remaining one tablespoon of butter.
- Bake until it's bubbling around the edges, about 35 minutes.
- Serve hot. 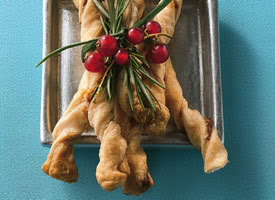 My parents didn't decide until Sunday morning that they would come over because my dad worked 14 hour days the last few days so my mom wanted to bring another appetizer since we had the main meals and she insisted on bringing something. These are AMAZING and sounded really easy.


Brownies...
My sister-in-law just made a box mix. She didn't time them and they turned out amazing... crunchy edges (My fave!) BUT a little gooey!!!